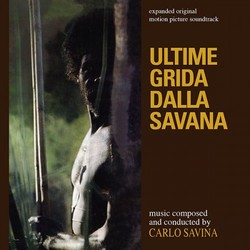 Quartet Records and Gruppo Sugar presents an expanded and remastered CD of memorable mondo mayhem with music by Carlo Savina.

Directed by original Mondo Cane cinematographer Antonio Climati in 1974 (together with editor Mario Morra), Ultime grida dalla savana was the cornerstone of the second mondo wave as it discusses the story of hunting from many different aspects, including the notorious Pit Dernitz lion mauling sequence.

Carlo Savina score follows mondo traditions by juxtaposing shocking visuals with great exotica and pop tunes. Besides the percussion-heavy segments for the raw hunting sequences, Savina also provides some lyricism with English language songs co-written with lyricist Gilbert Kapland: "My Love" is sung by Ann Colling during a political rally, while Kapland sings "Leave the Rest to Me" and "For You and Me."

A 40-minute LP of the soundtrack was released on CAM in 1974 and reissued later in CD by the same company (paired with the sequel Savana Violenta). For this premiere complete edition, we have included the remastered album program, and also another 40 minutes of previously unreleased tracks. Produced by Claudio Fuiano, the richly illustrated booklet includes liner notes by Gergely Hubai discussing the film, the composers and the score.