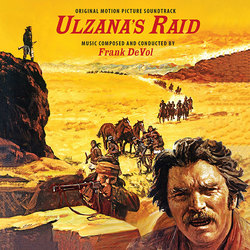 Intrada announces the first-ever release of Frank DeVol's intense score for the 1972 Universal Pictures film Ulzana's Raid. While DeVol anchors the score with an old-fashioned cavalry march, he infuses everything else with terse, aggressive music underscoring the intense western battle action. The score features two principal themes, the aforementioned march and a pensive theme for the Apache based more or less on historical Native American structures. For two highlight action set pieces, DeVol writes vividly with crisp rhythms and staccato punctuation in the brass, especially in some highly charged—and difficult to play—virtuoso intervals for the trumpets. In these two exciting cues, DeVol's complete absence of prominent string writing and his focus instead on challenging parts scored for brass and woodwinds is strikingly original. It's a challenging score for what, in 1972, would have been a challenging film.

This premiere release was sourced from the 1/2″ 3-channel masters vaulted at Universal and provides a distinct and clear stereo spread, featuring the complete 53-minute score plus an additional 7 minutes of extras.

In the film, Ulzana (Joaquin Martinez) escapes from an Arizona reservation and launches a bloody guerilla campaign against the region's settlers. Captain Gates of the U.S. Army (Lloyd Bochner) dispatches a green cavalry lieutenant, Garnett DeBuin (Bruce Davison), to evaluate the scope of the problem and quell Ulzana's war party. Assisting him is McIntosh (Burt Lancaster)—a grizzled scout who has taken a native wife and works with an Apache partner. Directed by Robert Aldrich, the film is an allegory for the Vietnam War.