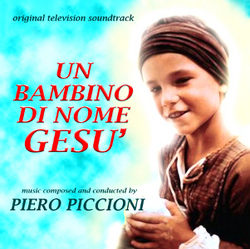 Piero Piccioni created an elegant soundtrack with some of the most beautiful and redolent melodies in his career, in which the maestro's unmistakable style is patent in every note. He composed captivating music, almost hypnotic in some moments, underscored with highly precise orchestration in which the string section is of paramount importance.

Piero Piccioni himself had planned an LP with 16 tracks that never saw the light of day. Now increased to 31 tracks and a duration in excess of 60 minutes, this release contains all the passages from the planned record as well as the rest of the score. This is a true musical gem to be listened to again and again, abandoning ourselves to the evocative power of a score that combines childhood enderness with a sound bordering on the mystical and the religious, heralding the life lying ahead of Jesus.