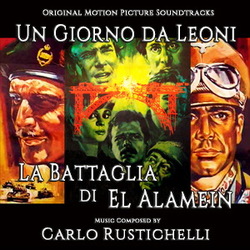 For Un giorno da Leoni, Carlo Rustichelli's main theme has that typical Rustichelli touch with its melodic beauty and its discrete elegance. It is one of those touching themes which goes straight to the heart. Through this music which throughout the score recurs in many subtle variations. All in all, Rustichelli has written a lovely, haunting and highly emotional score dedicated to the spirit of the partisan soldiers which now gets its world premiere on this CD.

In addition our CD also contains as a bonus the first ever release of the rather short score—with a duration of about 20 minutes—which Rustichelli wrote for the 1968 war movie La battaglia di El Alamein.

Almost from the outset a mood of despair and hopelessness is established which is also underlined by Rustichelli's ominous and suspenseful music with its string tremoli and threatening chords and with the mysterious sombre humming of a male choir. Music is used very sparingly throughout the first half of the picture with many short and disjointed cues so that we have decided to combine some of them to somewhat longer tracks.

Besides an oriental dance in a bar and a Scottish bagpipe tune which is imitated by two electronic organs, there is also a nice solemn orchestral variation with male choir and high strings of the famous Italian "Rusticanella" theme.

Due to the age of this soundtrack the original mastertapes had some defects and anomalies which we tried to correct as best as possible during the mastering process. Although the sound quality in some tracks could not be improved, we have nevertheless decided to include them in this edition for their historical and musical value.