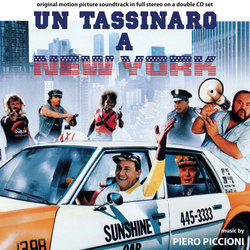 Piero Piccioni composed the lovely music for Un tassinaro a New York. At that time Cinevox Records had released an LP (MDF 33/182) containing twelve tracks selected by the author (35:29 minutes). In addition releasing this soundtrack for the first time on CD, we were also able to access the original recording session where we discovered an additional 64 minutes of previously unreleased music (movie versions and alternate takes) that give this sparkling OST almost nearly 100 minutes of material in stereo. Stylish romantic and nostalgic music alternates with passionate jazz pieces, blues and funk in pure Piccioni style. For listening purposes only, the composer also included original pieces from other films such as "The Seduction of Mimi" and "Strange Occasion."

We are pleased to release for the first time ever the OST by the late Manuel De Sica for Una botta di vita.. Maestro De Sica gave us his consent to include his short OST with that of Maestro Piccioni. We also discovered that various themes from Un tassinaro a New York were re-used to the recording, which makes this pairing just perfect. We have used every note originally recorded in stereo (about 34:19 minutes) from this very elegant single-issue soundtrack. A recurring main score in samba emerges that is reprised in slower versions using different instruments. This double CD is for the fans of Alberto Sordi, Piero Piccioni and Manuel De Sica, with a total time of 133:55 minutes.