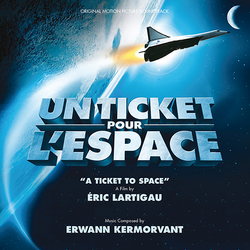 French composer Erwann Kermorvant, who studied film composition at UCLA and combines a distinct Hollywood sound with his very own voice, wrote a grand symphonic score for the French sci-fi comedy Un ticket pour l'espace (A Ticket to Space). The orchestral scoring is playing the drama and action seriously in the vein of some of the great comedy scores by Elmer Bernstein and Maurice Jarre, and the music pays tribute to the great science fiction film scores by composers such as John Williams, Jerry Goldsmith and James Horner.

Big romantic space music, great thematic material, some fun cinematic in-jokes, and ferocious action music for the giant mutant space turkey(!)... This score is too entertaining to be missed!