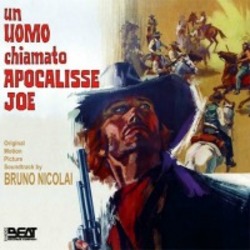 A hit in Beat Records Catalogue, Un Uomo Chiamato Apocalisse Joe, a western score composed by one of the Italian Great: Bruno Nicolai.

A soundtrack much influenced by the collaboration between the Maestro and Ennio Morricone, at times it seems to us to be listening to an alternate version of A Fistful of Dollars, interpreted by the unique skill of the Roman composer. A score previously available in Beat Records Catalogue paired with Lo Chiamavano Tre Sette Giocava Sempre Col Morto (CDCR45), sold out since at least 2 years, now remastered and complete with material never released before, alone, with a new sound engineered by Enrico De Gemini, original artwork edited by Daniele De Gemini, in depth liner notes by Fabio Babini and English edit by Josh Mitchell. Limited edition, can't be missed!