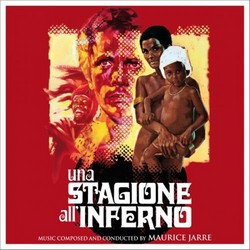 Jarre follows suit with an equally exciting cocktail made up of one part African tribal sounds and one part French romanticism. The score ranges from percussive action music for native battles and safari hunts to a tender love theme which is used to show Rimbaud's affections for an African girl (played by Brazilian-born actress Florinda Bolkan). Jarre's music encompasses three decades and two continents, mirroring the tumultuous events of the French commune and African colonization through the eyes of an enigmatic genius.

Una stagione all'inferno was first released on LP in France and Italy, including 12 tracks selected and produced by Maurice Jarre himself. The same program was reissued on CD by the Alhambra label in Germany in the early nineties. A subsequent expanded CD release from GDM in Italy offered more music, but was organized into three long suites. On this new release, we had access, for the first time, to the first-generation LP stereo master, recently found in Italy, and we can say that these 12 tracks have never sounded better! The audio is much improved from the previous GDM edition, which was afflicted with severe audio problems and whose right channel was partially damaged. The film tracks, sourced from the mono session masters (the only surviving elements) offer all the music contained in the film in a more optimal presentation, favoring individual film tracks instead of lengthy compilations.

Carefully mastered by Claudio Fuiano, the package includes an 8-page booklet with liner notes by Gergely Hubai, discussing the film and the score.