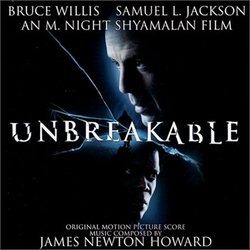 You've heard enough about the similarities and differences between The Sixth Sense and Unbreakable. For my part, I loved both, and found Unbreakable to be refreshingly original, with a sometimes self-referential wit that turned a lot of people against it. To each his or her own, I suppose. One of the greatest assets to both films in this M. Night Shyamalan duo, though, is composer James Newton Howard.

What have these scores got in common? Well, both are moody and well-crafted. From there, the similarities stop, for the most part. Where The Sixth Sense was a largely atmospheric effort with a couple of subtle themes and a lot of Penderecki-ish "ghost" music, Unbreakable leans more toward a lyrical, thematic style. From the opening "Visions" track through the End Titles, we're treated to some of JNH's most beautiful and haunting string writing to date (if not quite in the same league as Snow Falling On Cedars). The main theme, first heard in that opening cue, is heard several times throughout the film, often with a techno-ish drum accompaniment which works much better than it probably deserves to.

The jewel in this score's crown, however, is the "hero" theme for Bruce Willis' character. It is alluded to several times early in the score, usually on solo trumpet. It really breaks out in "The Wreck," and Howard pulls out all the stops in "Orange Man" (possibly the best cue on the album). It's slightly reminiscent of Vaughan Williams in orchestration, thought still thoroughly Howard, stylistically.

With the exception of "Blindsided," there are really no "loud" cues on the disc; no real horror music. What we have is a very interesting score, given a lengthy album release (due it's being the second JNH score recorded overseas). As for track titles, one might wonder if it's safe to read them after the dubiously titled "Malcolm Is Dead" cue on the Sixth Sense album. Rest assured, the spoiler factor here is minimal to non-existant. A wonderful score, and a more than worthy follow-up to The Sixth Sense.