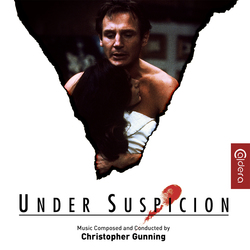 Christopher Gunning delivered one of his darkest, most brooding scores which at times evokes the spirit of Bernard Herrmann's well known and much celebrated style to underscore suspense and enhance the already dangerous situations in the film's scenes. Gunning wrote several themes and motifs, notably a love theme for Neeson's and Giacomo's characters which receives its variations throughout the whole score. The highlight of the score is undoubtedly the famous hanging sequence for which the composer wrote a 7 minute piece which builds steadily until it collapses at its climax and makes your adrenalin rush through your body.

Deservedly, Gunning won an Ivor Novello Award for his work on Under Suspicion in 1991. This is the third entry of a Gunning score in the Caldera catalog. As a bonus, we included an exclusive audio commentary by the composer where he talks about his work. The 15th CD release of Caldera Records features a detailed booklet text by Gergely Hubai and elegant artwork by Luis Miguel Rojas. The CD was produced by Stephan Eicke and John Elborg.