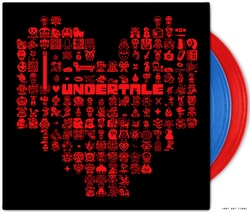 Recipient of multiple "Game of the Year" awards and countless 10/10 review scores, Undertale is amongst our most requested vinyl soundtracks. EVER.

For good reason—as Toby Fox's original score accentuates the odyssey of Undertale beautifully—a nostalgic, chip-riffed plummet down a 16-bit rabbit hole. Allusions to classic RPGs like Earthbound and Final Fantasy are certainly obvious, but the magic of Undertale's music is that in the wake of all its retro references, it deftly crafts a unique, emotional identity all its own.

Pixel-master Drew Wise's album art lovingly explores the lore of Undertale further, featuring hundreds of the game's characters - both on the heart-shaped cover collage and the interior gatefold dance party. The "Pacifist Blue" and "Genocide Red" colored vinyl is a nice *wink* to fans. Hell, there's even word search inserts!

Since the original soundtrack to Undertale contains over 100 tracks, we carefully curated the music to fit on this double vinyl set. Fret not, completionists—a digital download accompanies the vinyl, containing the entire, unabridged soundtrack.

As with all iam8bit vinyl releases, the music is mastered specifically for vinyl audio supremacy—this time by Infrasonic Sound, whose studio just so happens to be right down the road from our headquarters in Echo Park, California.