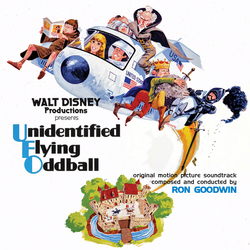 Goodwin delivered an energetic score that mostly plays the action straight. The greater part of the score is a showcase for the composer's vivid themes, injecting space-age pluck and dynamism into the film's cheerfully anachronistic vision of early medieval Cornwall. Most of the score's themes relate directly to the eponymous oddball spaceman, Tom Trimble. Foremost is a sparkling misterioso motif that opens the film in flute and bells over hushed tremolo strings. As the film moves into more adventurous territory, Goodwin beefs up the orchestration and reworks the motif into a propulsive action setting. Finally, the line is absorbed into a heraldic theme that confirms Tom as the tale's triumphant hero.

This premiere release of Ron Goodwin's bright and action-filled score for Disney's Unidentified Flying Oddball was made possible by the discovery of the original stereo session mixes, surviving on 1/4" two-track tape. The rolls of tape were in very good condition and included everything that Goodwin recorded for the film, allowing Intrada to present his entire score as intended, including a handful of cues recorded but ultimately not used. The recording features a crisp stereo image, with the profuse action sequences for brass in the latter part of the score being especially vibrant.