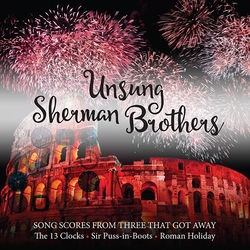 Unsung Sherman Brothers: Song Scores from Three that Got Away

By the late 1960s, the songwriting team known as the Sherman Brothers was already legendary. So, it's hard to imagine that starting in 1969 three exciting new Sherman Brothers projects were all cancelled, one after another. And these projects were heartbreakers for "the boys" (as Walt Disney called them), three that got away. But now Kritzerland is proud to bring these three song scores to you for the very first time!

For The 13 Clocks, they wrote a delightful score, but then Warner was purchased by the Kinney conglomerate and the project was cancelled. Happily they'd made a demo of their song score, orchestrated by Don Ralke, sung by the Don Ralke singers and guest singer Fred Darian. The score they wrote is classic Sherman Brothers, filled with their trademark hummable tunes and wordplay.

For Sir Puss-in-Boots, they created an original musical that would, in the brothers' words, "borrow a little bit of mythology from every fairy tale we could think of." They titled it Sir Puss-in-Boots. They assembled an amazing voice cast for the film: Sammy Davis, Jr., Karl Malden, comedian Jack Carter, Jinny Tyler, and English radio host, Michael Jackson. Everything was going well until the money ran out. And so, the second project was cancelled. Again, thankfully, a demo recording was made, with several of the voice actors singing their songs, including Sammy Davis, Jr., Karl Malden, and Jinny Tyler. And again, the brothers' songs are toe tapping, tuneful wonders.

Roman Holiday was a musical update of the classic film. They wrote three songs to play for producer Dino De Laurentiis. He loved the songs and the project was a go – until the day the studio pulled the plug. And that was the third cancelled project. But while the project was still a go, the brothers had the great good fortune of having the brilliant conductor, arranger, and orchestrator, Irwin Kostal, do orchestral recordings of the three songs. But before vocals could be put on them, the ax fell. For this CD, we took those three orchestral tracks and brought in singers to record the vocals all these years later.