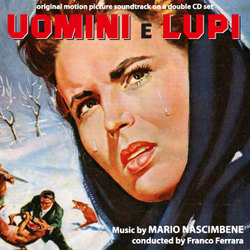 Digitmovies presents the second volume of the deluxe digipack series by releasing for the first time ever on a double CD set the complete OST by Mario Nascimbene from the movie Uomini e lupi.

Mario Nascimbene had already collaborated with the filmmaker from Fondi before when writing the score for Roma ore 11 (1952), "Giorni d'amore (1954), and later on he worked with him on La garconniere (1960). Mario Nascimbene (Milan, 1913 - Rome, 2002) is undoubtedly one of the greatest international names in film music, creator of experimental sounds with the invention of his prodigious "Mixerama. He was the first Italian composer who was able to cross the golden gates of Hollywood in 1954 for the movie La contessa scalza (The Barefoot Contessa) which was followed by many more scores for American and British films, but he was also very active in Italy. In 1956 he wrote in Hollywood the score to Alessandro il Grande (Alexander the Great) starring Richard Burton and here in Italy the music for Uomini e lupi, an extremely dramatic symphonic score which also includes popular instrumental themes for harmonica and guitar and with mixed choir.

The author (as he wrote in his official biography Malgrč moi, musicista) wanted to create a "sound design" with the steps of wolves in the snow, like a savage, tribal tam-tam, of a rebellious nature which melds with a traditional symphonic orchestra beautifully conducted by Franco Ferrara. For this double CD set we have used the master tapes in mono of the recording sessions from 1956 well preserved until today which allowed us to use every note recorded, including alternate versions, choral pieces and pieces with solo male voice so that our double CD has a duration of 88:14. A proper rescue and preservation of the Italian Golden Age, the music art of Mario Nascimbene and a sincere tribute to the land of Abruzzo which with its natural beauty has been the backdrop for the film.