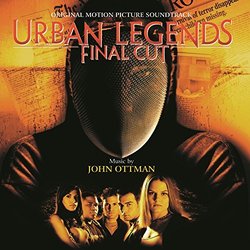 Performed by
The Munich Symphony Orchestra

We've all heard it, and even though some might think it's just an urban legend, it's not. It's the story of a composer/editor who was slated to edit and score a superhero flick for a good friend of his, but who had to bail when given the opportunity to direct his first studio movie. How does the story end? The superhero flick got a non-traditional score and many soundtrack fiends were disappointed; and our composer/editor's directorial debut got 62 rotten reviews out of 65 on the now-infamous Tomatometer.

I actually found myself enjoying Urban Legends: Final Cut for what it was. It was a fun, well-crafted flick, with apt directing, beautiful editing, and chilling scoring all coming from the same person: John Ottman. Faced with scoring a teen slasher, Ottman decided to approach the material using the good old "everything but the kitchen sink" approach. Urban Legends is one massive melting pot of experimental techniques, Ottman literally pushing every instrument to its limit and coming up with an array of bizarre, completely synth-free sounds.

For the opening kidney heist, he has the brass wailing and barking like angry dogs. For the scoring stage chase sequence, he gives the bass drum a literal run for its money. For the bloody dailies sequence, he has both brass and strings perform mad assaults on their highest pitches. For the airplane slashing, he gets his string section to perform a hair-raising descent that sounds like the musical equivalent of a cabin depressurizing. Those are just the most in-your-face experimentations in a score teeming with weirdness and envelope pushing.

Ottman rarely jots down a note before coming up with a strong theme to unify the score and unearth the recurring motifs and symbols of the movie. Urban Legends features a very feminine and hopeful theme for its lead character. It pulls us into the score right at the beginning of the CD in "Welcome to Alpine/Amy's Theme" and makes a grand, modernistic return for "Amy's Shoot" at the very end. There's a misterioso motif for Trevor, the usual suspect, which weaves its way in and out of a handful of cues. And two so-called "mystery themes" are played in "moments of suspicion", the liner notes tell us, delivering tonality and consonance before and after sequences of experimental slasher flick atonality.

Christopher Young's theme from Urban Legend makes a welcomed cameo in "I Know a Good Story" as Amy learns of the events of the first film, and "Funeral March of the Marionette", better known as the Alfred Hitchcock Presents Theme, is adapted to a delightfully clever piece over the end credits, bringing all the homages to the Master of Suspense full circle.

John Ottman's Urban Legends: Final Cut is certainly not for everyone. For one thing, the CD is overly generous. Even if the orchestrations are diverse and eclectic and the writing is wild and innovative, there is only so much atonal chase music one can swallow in one sitting; but if you are fascinated by extreme and non-conventional ways of playing a trumpet or a violin, this score just might be for you. While the screenplay has been pegged as a boring assortment of been-there-done-thats, the score is anything but. Bows are slashing strings, mouthpieces are murdering lips, and trombones are screaming bloody murder, but it's all done with a crazy glee that could only come from the dark, sadistic heart of one John Ottman.