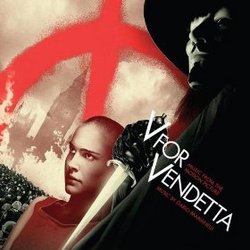 The "1812 Overture" is a well known symphonic work by Tchaikovsky that is commonly associated in the USA with Fourth of July celebrations. What few people know is that the "Overture" has nothing to do with the United States, or even North America. Instead of dealing with the War of 1812 between the U.S. and the U.K., the music represents France's aborted invasion of Russia during the Napoleonic Wars in 1812. That joyous, patriotic theme you hear at the end, while cannons are erupting left and right and fireworks are exploding in the sky? That's the Russian Army's theme, victorious against the onslaught of the French.

I mention Tchaikovsky's celebrated work here because Dario Marianelli's score to V for Vendetta is one long exercise in restraint that builds up to the "1812 Overture". The Russian Army's theme is hinted at in the brass section in the opening notes of "Remember Remember". The revolution led by the mysterious V against the future fascist British government culminates into "Knives and Bullets (and Cannons Too)" with the final two minutes of Tchaikovsky's masterpiece. The one hour of music in between plays not so much as a revolution as the twitchy and rather uneventful moments before the start of the rebellion.

Marianelli's addictive score to The Brothers Grimm showed diverse orchestrations and a wide sonic palette; V for Vendetta is more modest, consisting of string harmonies in constant motion backed by brass clusters and militaristic drums. His passionate score to Pride and Prejudice, an Academy Award nominee, was filled with emotions and vigor; V for Vendetta is short on emotions, preferring to gain momentum and increase the suspense, only to fall back into quietness for a few minutes. What I am getting at is this: fans of Marianelli's work, who were awed by the orchestrations of The Brothers Grimm and the drive of Pride and Prejudice, will be disappointed by this.

There is little doubt that Marianelli is a master of his craft. He possesses a well-rounded background and has produced quality work in the past. The problem with V might lie in the material which does not allow a composer to flourish and amaze until the very end. It has to be a quiet score, the music of the cogwheels of the revolution slowly turning before the fireworks. The writing is strong but the emotional impact is minimal. The composer uses a series of four "freedom chords" to rally the troops and entice a revolution and, while these chords work to convey this idea (especially in the majestic and victorious "Evey Reborn"), they are not particularly original or distinctive enough to provide the listener with a hook on which the whole score can be recalled. Long cues are filled with meandering strings without verve and only in the last few cues do the martial elements overthrow the vanguard and come to the front.

Star rating is always secondary to the review itself, but I am the album three stars out of five because Marianelli's worst is still better than the best of most up-and-coming composers. It is a solid piece of work, especially when the pace picks up, but it is also disappointing and long. If you are on a limited budget, you might want to investigate more valuable avenues. There is no doubt that composers are sick of people like me comparing their latest score to their body of work but, in the case of Marianelli, it is sadly almost impossible. Here is a composer who was catapulted into the limelight and whose scores quickly garnered popular and critical acclaim. There is simply no way out of the comparison: V for Vendetta, while a valiant effort, is unable to vanquish the very vigorous Grimm or the vibrant and virtuous Pride and Prejudice. It is venerable, sure, and vendible but its value is somewhat vapid by comparison.

Note: The album is interlaced with three songs: "Cry Me a River," "I Found a Reason," and "Bird Gerhl." All three are powerful yet intimate songs that complement the film's storyline, and don't interrupt the flow of the album.