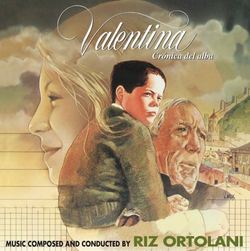 Both Valentina (1982) and 1919, crónica del alba (1983) tell the story of Pepe, a young boy who is madly in love with his neighbor's daughter, yet the tumultuous events of Spanish history tear them apart.

The romance was underscored by Riz Ortolani who provided a beautiful, romantically lush accompaniment for the decade-spanning affair. Since the films were meant to sequels to each other, quite a bit of the material recorded for Valentina was repurposed for 1919, crónica del alba, so the collection represents both films at the same time. While some cues emphasize the childhood adventures, the bulk of the music emphasizes Pepe suddenly growing-up at a young age.

A soundtrack LP with selections of the two scores was planned by C.A.M. in 1983, but was never released when the movies came out. Quartet Records not only issues the unrealized album, but also adds bonus tracks to present the full score of both films. Mastered by Claudio Fuiano from first-generation stereo master tapes, courtesy of Gruppo Sugar, The package includes a 8-page full color booklet with liner notes by Gergely Hubai that discuss the film and the score.