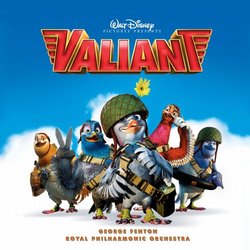 I didn\'t see Valiant, the British-made CGI-animated film about a pigeon who joins the Royal Air Force Homing Pigeon Service in World War II. In fact, I wonder if anyone really saw it here in the USA. Released by Walt Disney Pictures over here, the film was completely under the radar, and nary a peep was heard about it. Obviously that\'s going to affect the box office. In any case, the music for the film was provided by the ever versatile George Fenton, and for Valiant, he churned out a delightful score with plenty of nods to the classic World War II films of the 1950s and 1960s.

From the moment his opening track ("Valiant") starts, you know what kind of score you are going to be getting. Fully orchestral, lush and with plenty of warmth, Valiant owes a lot to Ron Goodwin - it feels like his spirit was hanging around Fenton while the score was being written. Sure there are a few moments of cartoonish mousing around, but for the most part, the score takes itself seriously. Strong themes are heard, and even a big band styled cue ("Arrival at Camp / Drummed Out of the Claw / In the Coop") doesn\'t feel out of place in the least.

The big highlight cue has to be the nearly 13-minute long track, "The Rescue and Escape". Dramatic tension mixed with action lets the Royal Philharmonic Orchestra truly shine. Fenton even gives us a lovely emotional (love?) theme that shows up on occasion. The only problem with the album is the obligatory pop song tacked on at the end. "Shoo Shoo Baby" is a weird hybrid of a 1940s Andrews Sisters styled song, and some kind of hip hop beats. At least it\'s at the end so you can stop the CD before it. The film might not have gotten much exposure, but I really hope that people take a chance to pick this one up - they won\'t be disappointed.