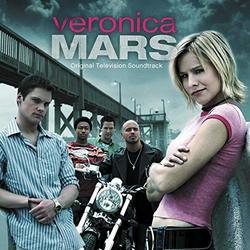 "Veronica Mars" debuted on UPN last year, and despite its terrible ratings became the only UPN drama to be renewed for the 2005-2006 season. It survived on the basis of critical acclaim rather than smashing ratings: TV Guide chose it as one of the 10 best shows on TV in 2005 and Steven King wonders, "why is \'Veronica Mars\' so good?" The show languished in UPN Ratings Hell while Joss Whedon gushed, "...I can no longer restrain myself. Best. Show. Ever. Seriously, I\'ve never gotten more wrapped up in a show I wasn\'t making, and maybe even more than those."

While low ratings are nothing new for a UPN show, the network and the creators of "Veronica Mars" don\'t want it to be the next "Arrested Development": critically acclaimed... and canceled. During the summer they released the entire first season on DVD to entice new viewers to join the show. Now comes the first "Veronica Mars" soundtrack CD, initially released before season two began airing. Unfortunately this push seems to have had little effect on ratings as the show regularly places 6th in its time slot, behind repeats of "Beauty and the Geek".

The first season, like a lot of shows these days, features very little original music, opting to instead recycle more familiar popular music. "Veronica Mars" featured some excellent music - "Don\'t Fear the Reaper" by Blue Oyster Cult, "Girls" by Death in Vegas, "Weak Become Heroes" by The Streets, "Just Another" by Pete Yorn, "Pata Pata" by Miriam Makeba, "Troubled Times" by Fountains of Wayne. This is a step up from most shows, a bit more eclectic, a bit more diverse, a bit less mainstream, less afraid to delve into the past. Not quite as much blatantly obvious "synergy" between Big Corp, Inc\'s music and television divisions.

You may have deduced that I was looking forward to this CD.

Unfortunately, none of those songs appear on the soundtrack. The CD opens with the show\'s theme, "We Used to Be Friends" from the Dandy Warhols\' 2003 album, which you know and probably love if you are a fan of the show. That song is notable for being one of the few that wasn\'t part of a 2005 release. When a TV show pulls off the "reuse popular songs" thing well it results in something more like a mix tape from your best friend than a cheap attempt to boost record sales. When tracks 2-7 all come from 2005 releases it results in a more disappointing, homogeneous experience.

After the Dandy Warhols\' contagious electro-pop introduction things slow down for a Mike Doughty number and most fans will be a bit confused right here. See, not every song on this CD actually appeared in season one of "Veronica Mars". In fact, it isn\'t until track 11 that you get back to another song from season one. At the end of the disc you realize that only four tracks appeared in season one. Some of them haven\'t, as far as I know, even appeared in season two yet. This decision left me feeling a bit...cold. I wanted a "Veronica Mars Season One" CD, dammit!  Instead I wound up with a "Veronica Mars Mostly Season Two" CD. I wanted songs that would had an emotional connection to the ups and downs off those first 22 episodes. I wasn\'t looking for an indie pop/rock sampler disc. Given the CD\'s release date - before season two had even started airing - and the amount of great material in season one, the choices are a bit bewildering. Especially when you get to Adrienne Pierce\'s "Lost & Found" which not only doesn\'t appear in "Veronica Mars", but also doesn\'t appear on Pierce\'s only album. Is it just a coincidence that Pierce and this soundtrack are both released by the same label?

Okay, okay. Just because they don\'t appear in season doesn\'t necessarily mean they aren\'t good songs. There is a track from Spoon\'s recent, excellent, Gimme Fiction album, so that\'s a good sign. Unfortunately, that\'s the high point. With a few exceptions - the keyboard styling on "The Way You Are", the psychedelic folk strumming on "Lily Dreams On", the simmering vocals on "Ocean City Girl" - you\'d better be settled in for a lot of similar pop rock.

This is not a bad CD, it is still packed with some excellent tracks. A careful viewer of "Veronica Mars" is likely to be disappointed with the selections but if you can look past that you\'ll find a collection of good, if frequently, unspectacular, songs that may have slipped under your radar.