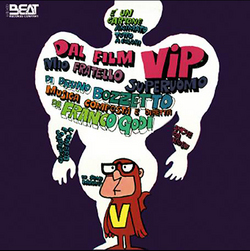 In 1968, the animated movie Vip mio fratello super uomo was released, a genial story about consumerism told through the pen of the great cartoonist and director Bruno Bozzetto.

The score by Franco Godi is possibly the most suitable soundtrack that could have been created for this cartoon. It's full of great sonorities of the period, still fresh and without age, sparkling with sumptuous orchestrations, lounge style and funk derivations. Herbert Pagani and Nora Orlandi (with her vocal group 4+4) both recorded songs for the album, bringing an additional element of quality to the artistic landscape.

We present with this CD another useful gadget, a thin cardboard tunnel-box slipcase featuring the covers of both Vip mio fratello super uomo and West and Soda (another score for a cartoon of the same name by the same director), which will allow you to display the two soundtracks dedicated to the animated movies of the wonderful Bruno Bozzetto together on the shelf.

The CD is packaged in a jewel case with a 12-page booklet full of original Bruno Bozzetto artwork, with audio mastering by Claudio Fuiano and liner notes (in Italian and English) by Andrea Morandi (CIAK magazine).