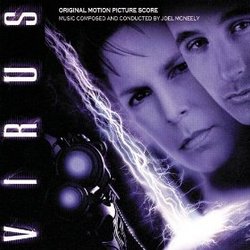 This has certainly been a unique time for Joel McNeely. He has been in the rather unfortunate situation of providing excellent scores for movies that have flopped at the box-office. First came The Avengers, a film that was plagued with problems - but had an excellent score. Then came Soldier, a film which fared slightly better, but still didn't last very long. Then came Virus, a film that sank quicker than the ship on which it's set. Like the films before it, Virus provided a great opportunity for McNeely to stretch his legs and try out a different genre.

The score to Virus has all of the elements necessary for a sci-fi horror film - the creepy atmospherics, the straining orchestra, and the large hits - but it also has a few great themes that tie these elements together. The first theme we hear is a dark male chorus providing the Volkov theme with the orchestra. Ominous and creepy, this theme shows up several times in the film. The next major theme to be heard is a leitmotif of sorts - that of Typhoon Leah. Large and devastating, we can almost see the waves crashing as the orchestra hits the major chords.

One is reminded, at times, of Aliens and Predator in the scoring - but it is more of a stylistic approach than anything else. Tense heart-pounding chase music ("Seven Footer Chase") sounds a little like McNeely's work on The Avengers, but that shouldn't be too surprising as he scored both films around the same time. (Virus took a little longer to make it to the theaters.) There is a little bit of romance in the film, and McNeely even takes the time in the middle of all the destruction to infuse a little bit of a romantic theme in the film ("We Can Kill This Thing").

Interestingly enough, the full vocal version of the Volkov theme appears only in the "End Credits" track, just after the reprise of the "love theme". I felt that the "End Credits" is the best track to listen to for one to get an overall sense of the score in the film (however the chase music is not included on that track). It seems to be increasingly rare nowadays for a film to even have orchestral End Credits, as a "pop song" usually works its way into the film at that point.

Ultimately, Virus is a score definitely worth picking up. It is just so unfortunate that most people won't know about it because the film isn't in theaters anymore, and the score is probably harder to find as well. I just hope that McNeely finds the project that will not only be a musical success (as he has been doing), but a financial (and therefore visible) success as well.