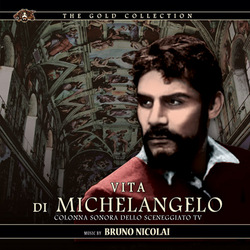 Directed by Silverio Blasi and and scripted by Romildo Craveri and Diego Fabbri on the subject of Giorgio Prosperi was based on the life of the Italian painter Michelangelo Buonarroti, whose 400 year anniverary from his death was being celebrated at the time of production.

The first 21 tracks of this soundtrack are the exact same program and recording released on vinyl on Bruno Nicolai's own record label Edipan. The remaining 15 bonus tracks (an additional 33 minutes of music) are presented for the very first time ever courtesy of the Edipan vaults and BEAT Records.

This CD is deinitely destined to quickly become a collector's item. A must for all Bruno Nicolai fans.