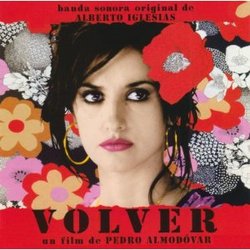 Acclaimed on its presentation at the 2006 Cannes Film Festival, Volver reunited director Pedro Almodovar with two of his leading ladies of years gone by - Penelope Cruz and Carmen Maura. Reviews suggest the film is a typical effort from the acclaimed Spaniard: a high-strung female-centred melodrama with extroverted colour palette, earthy humour, black comedy, some unusual genre crossover (here a ghost story), and a fair bit of self conscious camp. Despite exuding a far warmer and cuddlier air than the director\'s divisive Bad Education, and securing strong box office results for a foreign language film, Volver\'s showing at the recent Oscars was lean indeed. Penelope Cruz represented the film alone for Best Actress, Almodovar not even securing a Best Foreign Language Film nomination.

Alberto Iglesias\'s score should also be counted among those unluckily passed over by the arbiters of cinematic taste in Los Angeles. With a recent induction into the Music Branch following on the heels of his nomination for his score to The Constant Gardener, the Spanish composer\'s work appears to be highly esteemed by both critics and peers. Indeed, Volver was cited by Hans Zimmer, Gabriel Yared, Howard Shore and recent Oscar winner Gustavo Santaolalla as a personal favourite among the scores of this year in a recent Hollywood Reporter "Film and TV Music" Issue. And rightly so - for over the years Iglesias has perfected an approach to scoring based on (for the most part) chamber ensembles specific to the ideas of each film. In both concept and composition, he has offered compelling solutions to the musical demands of films by Carlos Saura (Dispara), John Malkovitch (The Dancer Upstairs - one of the most underrated scores ever), and of course the films of his ongoing collaborators Julio Medem (La Ardilla Roja - one of Stanley Kubrick\'s favourite modern films; Lovers of the Arctic Circle and Sex and Lucia) and Almodovar, all of whose films since La Flor de mi Secreto have been scored by Iglesias.

Volver marks the sixth collaboration between Iglesias and Almodovar, and the more melodramatic air of Almodovar\'s new film seems to have given the composer room for a lighter touch than their last few efforts. It\'s probably closer in sound to La Flor de mi Secreto - their first collaboration - more than any of the others. "Las Vecinas" jumps to life with jaunty string rhythms, pizzicati, and a revolving door of elegant solo instrumentation - including guitar, piano and violin. The vibrant "Titulos" adds to this engaging blend of voices brass, percussion and string support - the energetic orchestrations giving way to the composer\'s elegant writing for clarinet, and a morose passage for a larger group of strings. There\'s a theme presented here that recurs throughout the score, and sounds a little like Gabriel Yared\'s unused "Paris and Helen" love theme from Troy, though I say that for sake of comparing it with something rather than suggesting an influence.

As with much of the composer\'s work, Bernard Herrmann comes to mind. And perhaps this score is what that hypothetical Spanish-set Douglas Sirk-directed adaptation of The Ghost and Mrs Muir you\'ve always wondered about might have sounded like if Herrmann had scored it. The Herrmann influence is never courted as specifically as it was in the "Titulos" of Bad Education (and certainly not as devotedly as in Roque Banos\' The Machinist), and Iglesias\'s voice is familiar enough to know that this work is his own, but it\'s there all the same.

The beauty and clarity of each instrument\'s voice is a strength, as it often is in this composer\'s music. The progression of guitar, flute and string writing in the brief "Irene Bajo La Cama" is gorgeous, as is the following "El Ano Seco" with its violin solo. Though there is a sense of lightness to the music throughout - especially when compared to previous Almodovar scores like Talk to Her and All About My Mother - the score\'s tone does vary significantly. Some passages recall the energy of the opening ("Las Vacenas - Variacion", "La Comida Casera"), with many voices interacting dynamically, while others like "Arrastran el Cadaver" are more contemplative, carried by a lonely solo melody - a dextrously performed clarinet, in this case. What I assume are drastic on-screen events require cues like "Paco Congelado" to court harsher suspenseful writing, though thankfully Iglesias is not a composer whose suspense music fails to inspire the listener away from the film. (The demented pizzicati against cor anglais solo is a lovely touch in particular.) Even the darkest portions suggest a dramatic world where the dangers are not entirely to be taken seriously: the meandering feel of "Se Aparece + Trabajo" for example. Overall, there\'s something slightly unhinged about this music - a nervous energy that would suit modern thriller scoring well, and one can imagine a classic Mission: Impossible set-piece set to music like "Irene y Agustina".

Recording and mixing of the album (by Jose Luis Crespo and Red Led) is superb - communicating each voice in the ensemble. Performers - including a few regulars from previous Iglesias recordings - acquit themselves finely. The three songs on the album all appear in the film - as is common in Almodovar films. (Penelope Cruz\'s character apparently sings "Volver", though on album it is performed by Estrella Morenta). None of the songs overly intrude for the listener trying to focus on Iglesias\'s score, though the final track "A Good Thing" (performed by Saint Etienne) belies its name. After such atmospheric scoring, this girl power ballad can\'t help but feel extremely slight.

I only wish I could discuss this score less as an album, and more as a film score, for I find - as is often the case with this genre of music - that Iglesias\'s scores inspire me more after I know how the dramatic demands of the film have influenced the musical choices. Having said that, Volver works remarkably well as an independent listening experience, and offers fans of film music with a taste for eclectic classical chamber music much to enjoy. For these, and for fans of elegant drama scoring in general, Alberto Iglesias\'s Volver is a must. One of the best film music albums of 2006. And hopefully there\'s much to look forward to in 2007 from this composer - including Savage Grace, Caotica Ana (Julio Medem\'s new film), Her Majestic Minor, and a non-film music album.