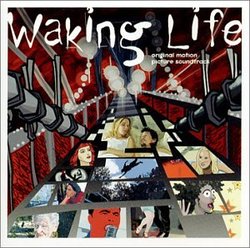 Richard Linklater has artfully conveyed the apathy and difficulties of a generation with such films as Slacker and Dazed and Confusion.  He takes a bold, though not necessarily brilliant, leap forward with Waking Life. Needless to say, the more mature subject matter calls for a more mature musical treatment and this soundtrack delivers.

Using both live action and animation, Waking Life shows a man in a dream state encountering many characters who, one by one, give their thoughts on the meaning, perception, and reality of human existence.  The film includes an array of real-life "thinkers" giving their thoughts on the world and life as we know it.  Though not necessarily dramatically satisfying, the film does succeed in making you think, which is an increasingly rare accomplishment in today's cinematic climate.  Like the soundtrack, the film is not for everyone, but for more pensive souls, it may very well hit the spot.

The soundtrack for Waking Life is mostly performed by the Tosca Tango Orchestra, and that tango feel permeates almost every piece, conveying both rich emotion and dark melancholy.  There are thematic motifs in the work, but it is done with enough subtlety that the music stands on its own well, without referring you too strongly to the film.  The soundtrack is very effective in creative atmosphere, without being obtrusive.  It is slow and lugubrious at times, but never in an appropriate way; to the contrary, it seems to enhance the work.  It reflects a measured maturity different from the director's earlier work.

Some would argue that the music is simply not dramatic enough for a good soundtrack.  It is not "pushing" the plot forward.  However, I think what Linklater was aiming for was not music that would steer one's emotion from beat to beat and scene to scene, but music that would create a rich layer underneath.  For most other films, this soundtrack would remain wanting; but it works fine here.

In conclusion, while most soundtracks are ultimately only entertaining to fans of the film which they accompany, this soundtrack could work quite well for people with an interest in slow tango or just good emotive background music.  If you're not a fan of the movie, or someone who likes music to get your heart racing, this soundtrack may not be for you; but otherwise, it might not hurt to give it a listen.