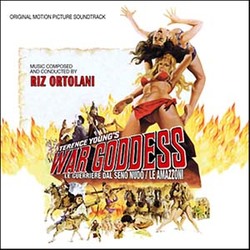 Premiere CD release of the complete score by Riz Ortolani, written as a cheeky homage to peplum scores for Terence Young's 1974 War Goddess.

Previous releases of this score contained precious little of the actual film tracks which make their debut here. The first 10 tracks is the program of the original LP from Cinedisc, issued only in Japan (and partially reissued on CD by Point Records in 1995), while tracks 11-22 contain the actual takes used in the film. The score's central theme is a playful march for the amazons, followed by several beautiful romantic set pieces for the relationship of Queen Antiope and Prince Theseus. The program also contains a huge battle track and haunting suspense material for the tribe's dark rituals.

This release mastered by Claudio Fuiano, includes a 16-page color booklet with liner notes by Gergely Hubai, discussing the director, the composer, the score and the special role of the film within Italian cinema.