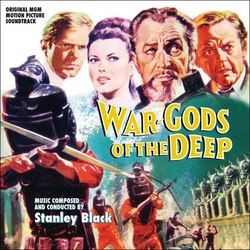 Quartet Records is proud to present the first ever complete release of not one, but two Stanley Black scores from MGM feature films!

Crossplot (1969) was Roger Moore's first theatrically released feature film after doing six consecutive seasons of the The Saint on television. The proto-007 feeling of the film is due to Stanley Black's cheeky Bond-flavored score, headlined by the John Rowles theme song "I'll Find My Love" with imaginative variations peppered thoroghout the score. The music was later tracked into several episodes of cult Roger Moore / Tony Curtis show "The Persuaders".

Since the recording tapes are completely lost, this release is mastered from music stems elements in mono, courtesy of MGM, accompanied by a richly illustrated 28-page booklet with liner notes by Gergely Hubai, who discusses the composer and the films with a track-by-track analysis for both titles.