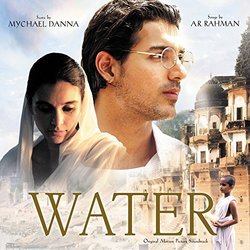 You know you\'ve got a great score in your hands when you have to start writing the review before you even have access to the full soundtrack release. Listening to a promotional copy of Mychael Danna\'s score to Water, which lacked the songs by A.R. Rahman, made me smile.

Mychael Danna was back.

After the disappointing Where the Truth Lies, Water is a true return to form for the Canadian composer whose masterful use of non-Western instruments has often resulted in soulful compositions. His score to Water, while borrowing regional elements from his own Monsoon Wedding, is even more mature and elegant. It feels like a culmination to a phase of self-exploration and experimentation: the result is a focused and breathtaking musical journey through the sounds of India with a memorable theme as its anchor.

Our introduction to the thematic and instrumental materials of Water lies in "House of Widows", a five-minute survey of the whole album, starting with the main theme in full Indian fashion, delving into sitar improvisations, climaxing into a Western fleshing out of the theme for the string ensemble, and resolving into a quiet rendition of this melody on bansuri. Rarely have I ever paused an album on my first listen after the opening track; I did with Water, because "House of Widows" deserves a second listen. It had me genuinely smiling for five minutes and any piece of scoring which can do that is worthy of a very high recommendation.

While Water is an amazing work, one needs to be open to the sounds of traditional Indian music to appreciate it. Danna makes good use of the bumbly tabla, a duo of Indian drums, in "Chuyia Explores", while the theme is reprised in typical Hindustani fashion on the sitar. The bansuri, a North Indian flute, answers the sitar by hinting at the theme, while "Where Is She?" and "Kaalu" introduce an Indian hammered dulcimer, the santoor, which exposes the main melody with a rich, metallic voice. "Ladoo Dreams" rounds up the traditional ensemble with the shehenai, a quadruple-reeded North Indian oboe sounding like the bastard child of a European oboe and a kazoo.

While every score track on the album stands out as beautiful and masterful, special attention needs to be drawn to "Train", easily the best track on Water. Danna strips away the Indian elements and presents his theme in a fresh European incarnation, beginning with a blossoming in the lower string section over an imitative figure on the santoor. The motif stabilizes and mutates into a superb all-string rendition of the theme, accompanied by fully-fleshed out Romantic harmonies, recalling the raw power of brother Jeff Danna\'s "Follow Me" from The Gospel of John. The poignant sound of the bansuri, which had been used prominently and to good effect in Monsoon Wedding, comes back to resurrect the theme in its native Indian form and it is impossible not to remember Danna\'s effective themes from The Sweet Hereafter and The Ice Storm. His knowledge of traditional Indian music and his talent for creating melancholic themes combine to give us a great dramatic track worthy of any film music compilation.

Five songs, all composed by A.R. Rahman but performed by different singers, are woven into the fabric of the score. The use of identical instrumentation and even the borrowing of motifs and themes from the score help make them an integral part of the experience as opposed to a series of distracting interruptions. The singers do make prominent use of melismatic singing and notes that fall in between traditional Western pitches, which can make those five-minute songs a little off-putting to Occidental ears.

The soundtrack to Water is exceptional: it is respectful of traditional Indian music while mostly accessible to an international audience. Mychael Danna has, since his humble beginnings, become a master at the art of conveying powerful emotions without resorting to Hollywood stereotypes, preferring the rich and graceful sound of an exotic flute to the overplayed string harmonies of sadness. Water stands as one of the best scores of 2005 and certainly as Mychael Danna\'s crowning achievement.