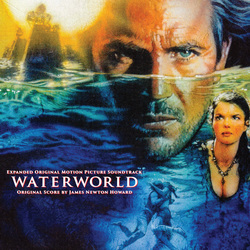 La-La Land Records, Universal Pictures and Universal Music Special Markets present the remastered and expanded 2CD reissue of renowned composer James Newton Howard's original motion picture score to the 1995 action/fantasy feature film Waterworld, starring Kevin Costner, Dennis Hopper and Jeanne Tripplehorn, and directed by Kevin Reynolds. Considered by many to be one of the great 90's action scores, and even considered by the composer himself to be one of his best, Waterworld is musical work for the ages – a thrilling orchestral epic, bursting with propulsive action, robust themes and rich emotion. This deluxe re-issue showcases an assembly worthy of this important score, including never-before-released material, bonus tracks and a total running time of over 2 hours. Produced by Dan Goldwasser and Mike Matessino, and mastered by Matessino from original elements in the composer's personal archive, this special limited edition release of 3000 units features exclusive, in-depth liner notes by writer Tim Greiving and art design by Dan Goldwasser. The striking cover art is a previously unused piece by legendary illustrator/artist Drew Struzan!