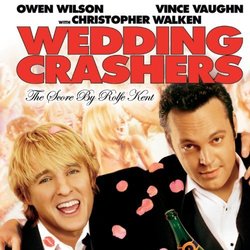 One of last summer\'s surprises was a modest comedy called Wedding Crashers. In a summer of overripe mediocrity, this comedy did big business because it did exactly what it advertised – it made you laugh. But I think there was something else going on with the movie\'s success; it not only had big laughs, but had a big heart as well. It was a romantic comedy masquerading as a raunchy comedy and so walked a fine line, appealing to both men and women.

Part of the reason Wedding Crashers walked that line so well was Rolfe Kent\'s score. Wedding Crashers was not Kent\'s first romantic comedy; he\'d scored Kate and Leopold, 40 Days and 40 Nights, and Legally Blonde, and went on to score last fall\'s Just Like Heaven. But if that was all you knew of Kent, this score would surprise you. It certainly has all the ear-marks of the genre, swelling orchestral sounds, lush melodies, plenty of bell sounds, but it also has a bit of a quirky sensitivity to it. Slightly swinging rhythms build momentum only to pause for a moment before continuing. An Irish bouzouki jangles along with a clarinet. And a waltz worthy of Strauss bursts out of nowhere only to recede almost as quickly as it appears. Credit this part of the score to his experience working with directors like Alexander Payne (Citizen Ruth, Election, About Schmidt, and most recently, Sideways) and Neil LaBute (Nurse Betty) whose delightfully offbeat films have inspired Kent\'s best work.

This combination of sour and sweet is seen in the final cue "Winning Claire Back." It opens with what I can only call the \'Crasher\'s Theme\' because it plays underneath all the antics associated with the main characters working their way into weddings. It\'s a fairly simple theme, almost pentatonic in construction, but Kent makes it interesting in the tuned percussion that accompanies it. The rhythms those instruments play make the theme infectious, and the smearing between notes in the melody and the accompaniment add just the right amount of sass to let you know that the protagonist\'s actions in said weddings are not completely sincere. Then, about 40 seconds into the cue, the mood and timbre abruptly shift. Bouncy rhythms are replaced by long notes in the strings and a piano takes the melody from the woodwinds. The segue is seamless as sweeping emotions take center stage. This new melody is reminiscent of Claire\'s Theme from earlier in the score, but it is dropped and as the crashing continues, the Crasher\'s Theme returns. But it is now mixed with the piano and longer notes from the strings that interrupt the theme\'s forward drive. Gradually throughout the cue, Claire\'s Theme emerges from those long notes actually takes over the Crasher\'s Theme as, on screen, John and Claire finally connect. Then, in a welcome surprise, the Crasher\'s Theme returns just to let you know this ending might not be as textbook as you think.

"Winning Claire Back" is a lovely piece of scoring, fulfilling every aspect we might ask of a score. Unfortunately, by the time we get to that point, we\'ve actually become tired of the main themes, particularly the Crasher\'s Theme. Like the movie itself, it overstays its welcome. We stop really listening. By the time we get to the end of the score, we\'re ready for the sense of fun and timbral excitement we felt at the beginning. As good as that last cue is, we can\'t help but think that we\'ve heard it all before.

Rolfe Kent is a fine composer and his score for Sideways was consistently innovative and fresh. Wedding Crashers starts out that way. It helps the movie walk the fine line between raunch and heart. It has some interesting musical ideas you don\'t normally associate with the genre. But when all is said and done, the score sadly runs out of steam.