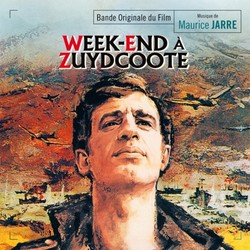 After the success of Cent mille dollars au soleil (Greed in the Sun), Henri Verneuil adapted the 1949 Prix Goncourt winning novel Week-end at Zuydcoote by Robert Merle about the debacle of 1940. This big-budget blockbuster allowed Verneuil to try his hand at the war film genre and to work once again with French composer Maurice Jarre, three years after Le Président in 1961. In order to illustrate the absurdity of war, the composer wrote a richly and uniquely orchestrated score, based on an obsessive and oppressive waltz and dominated by pounding percussion, from which emerges from time to time the sound of a banjo or an out-of-tune piano.

This expanded edition has been fully remastered from the scoring session elements, featuring previously unreleased and unused tracks. The CD comes with a 8-page booklet with liner notes by Sylvain Pfeffer, discussing the film and the score. The release is limited to 1000 units.