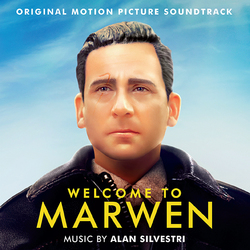 Intrada and Universal Pictures present the soundtrack release to one of this season's most anticipated films - Welcome to Marwen, from Academy Award-winning director Robert Zemeckis and starring Steve Carell. When a devastating attack shatters Mark Hogancamp (Carell) and wipes away all his memories, no one expected recovery. Putting together pieces from his old and new life, Hogancamp meticulously creates a wondrous town where he can heal and be heroic. As he builds an astonishing art installation—a testament to the most powerful women he knows—through his fantasy world, he draws strength to triumph in the real one.

For scoring duties, Zemeckis relied on his 30+ year relationship with composer Alan Silvestri, who has had a busy year, previously scoring the summer blockbusters Ready Player One and Avengers: Infinity War. As always, Silvestri provided Zemeckis with the perfect score, embodying the music with the sense of adventure, wonder, and tenderness of his beloved score for Back to the Future. The colors of solo clarinet, flute and piano permeate throughout in the score's more sensitive moments, while the women of Marwen are scored with a military and heroic bent, underscoring their strength at protecting Hogancamp as part of his fantastical art installation, the town of Marwen. The result is a warm symphonic fantasy—classic Alan Silvestri!

Intrada will release Alan Silvestri's score to Welcome to Marwen on CD and Universal's Back Lot Music will release the score digitally on December 21.