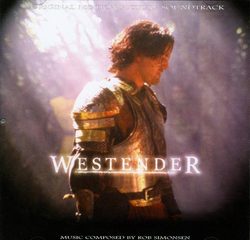 There\'s a dagger in Westender\'s back that keeps it from truly taking flight and that frustrating bodkin is the mix. Understandably, a project such as Westender probably had a budget in the three-digit zone; I shouldn\'t expect a mix on par with what Casey Stone did on Superman Returns. Yet, the mix is what it is and, budget or no budget, the mix ended up hampering my enjoyment of this album. The music itself rarely soars or picks up the pace; it is the music of flashbacks and solitary quests. But when it does attempt to take off, the way the instruments are mixed together, the final sound of the ensemble, is somewhat numb and lacks depth. The music itself, however, is good if somewhat lethargic at times and there is much here to admire despite the disappointing mix.

The story behind the production is an interesting one: an unproduced script in film school soon turned into a 45-minute short which, after an aborted shoot, turned into a full-length film. Its story concerns a man named Westender who reaches rock bottom, looses a precious heirloom, and sets himself on a quest to find it and thus redeem his life. Critics for the film seem to have singled out the score (as well as the gorgeous locations) as perhaps the greatest thing about Westender: indeed, here I am finding comments like "resonant score" and "lush music score". The music, I am led to believe (for I have not seen the movie), works wonders and is even "almost solely responsible with providing any emotional impact" (quote from DVD Corner). This emotional impact is brought about by the fair use of strings but mainly by the main theme, introduced by a woodwind in "Preamble". I do have a beef with this theme, even though Simonsen uses its effective melody quite well. The main theme has at its core a 1-4-6-5 motif, meaning the "hook" of the theme is the tonic, followed by the 4th, the 6th, and the 5th (Bb, Eb, Gb, and F in this particular example). It is the same "hook" used for Peter Parker\'s Theme in the Spider-Man movies... and for the Main Title Theme to Star Trek: Deep Space Nine... and for Stargate: Atlantis. It seems the motif has been hard at work in the sci-fi/fantasy arena and I, for one, would appreciate a breath of fresh air once in a while. This little rant should not be targeted at Rob Simonsen in particular, however; hearing the motif here simply reminded me of the many times I have heard it in the past and it stripped Westender of a certain layer of originality.

Praises, however, must be given where praises are due. "Gypsy Song" is a haunting song for female singers with a catchy melody and simple, warming harmonies. Simonsen makes good use of what sounds like a vielle, most prominently in "Recognized" where it saws away at a dance rhythm for a pretty neat action sequence. The scratchy sound of the vielle sets a pre-Baroque tone and helps flesh out the sound of the string ensemble whenever it is used. "Follow the Sunrise Over the Top of the Mountain" introduces a beautiful and ethereal moment for heavily-reverberated flute over warm string pads that takes us away, albeit momentarily, from the slow and recurring string harmonies. "Black Spirits" incorporates a bit of musical sound design to imitate the cries and unsettling sounds of birds and unsightly creatures. All these creative moments bring a little bit of diversity to the table; between these, unfortunately, are sagging lentos that seem to stretch for minutes on end. A tighter trim on the album running time could have made Westender more listenable.

Rob Simonsen\'s day job is as a composer working with Mychael Danna. He has contributed, in fact, to such movies as Where the Truth Lies, The Nativity Story, and the upcoming Fracture and Surf\'s Up. It is neither a compliment nor a scolding to say that there\'s very little of Danna\'s style in Westender. The score was, after all, written before Simonsen joined Danna\'s team (to the best of my knowledge). Simonsen\'s website, however, does offer some great restrained pieces written, notably, for Eve and the Fire Horse which show Danna\'s inclinations for non-Western writing influencing Simonsen\'s music. I found the "pre-Danna" music of Rob Simonsen to be sometimes languid yet potent; the music he has composed since then sounds more challenging, unconventional, and poignant, more exotic sound driven than harmony based. I am biased, however; my affection for Mychael Danna\'s music should be no secret by now so it\'s no surprise that I praise Simonsen for allowing his music to echo that of one of my favorite film composers. In the final analysis, it means that Westender was not quite what it could have been, but I certainly look forward to Rob Simonsen\'s latest solo efforts. He has the talent to impress me and he is walking in some big, nonconformist footsteps. The years to come should prove very interesting.