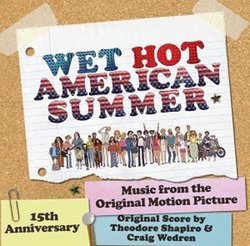 A cult classic revered by its dedicated fans, Wet Hot American Summer has a fun and adventurous score composed by Theodore Shapiro and Craig Wedren. From the iconic 80s montage anthem "Higher & Higher," to the militaristic pomp of "Gene's Address" and Mr. Blue & Chubb Rock's hip hop jam "Summer in America," not to mention appearances by some of everyone's favorite counselors, this album perfectly captures the heart and soul of Camp Firewood's zany adventures.

Never before released on any format, the album, which drops in celebration of the film's 15th anniversary, resonates as a must-have for soundtrack and first-pressing collectors alike. Remastered from the original sources for the best quality sound.