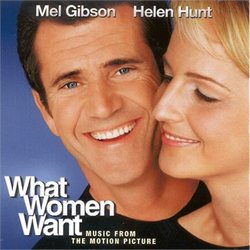 What happens when a shameless, ambitious womanizer suddenly has the ability to read women's minds? That question is answered in the comedy What Women Want. Nick (Mel Gibson) is an Ad Executive who ends up (through a rather funny mishap) with the ability to hear what women are thinking. Ruthlessly enough, he uses his new abilities to steal ideas from his competitive new boss (Helen Hunt). It's a rather typical comedy with romantic undertones and plenty of character growth - and it also happens to be filled with enough songs from the Capitol Records library that you would think the Rat Pack is still alive and kicking.

With a multitude of songs licensed from Capitol, it was surprising that the resulting soundtrack album (complete with a disclaimer: "At the time this album when to press, all tracks were anticipated to be contained in the picture. This may be subject to change.") was released on Columbia Records instead. But nonetheless the interesting, if not a tad eclectic collection of songs definitely create a winning combination. Sinatra classics like Sinatra's "Too Marvelous For Words", "I Won't Dance" (complete with Mel Gibson dance moves - in the film), "I've Got You Under My Skin" fit into the film because Nick was raised in Vegas by his showgirl mother, and it seems to add a sense of class to anything Gibson does.

Other tunes, such as Bobby Darin's "Mack the Knife", Nancy Wilson's "The Best is Yet To Come", Sammy Davis Jr.'s "Something's Gotta Give", and The Temptations' "Night and Day" work well in the film, because the message of the songs fit with the events unfolding on screen. Other songs are used for comedic effect, such as Christina Aguilera's "What A Girl Wants" and Meredith Brooks' "Bitch".

The album concludes with a (sadly) short track from Alan Silvestri's score to the film, in which he provides a rather effective, yet somewhat standard dramatic cue from the film. It's emotional and moving - just what it should be - but it feels somewhat alone compared with the more upbeat and jazzy songs on the album. (A score album would be, therefore, much appreciated.) Running about 45-minutes long, this is a rather enjoyable album, and if you've seen the film, you'll probably want to pick this one up.