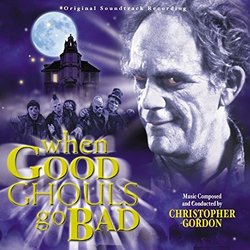 When Good Ghouls Go Bad is a television film (now on home-video) about a young boy, Danny Walker, who moves to his dad's old hometown.  But things aren't what they seem, and the town is unable to celebrate Halloween because of a 20-year old curse - a curse that is directly related to the Walkers.  Providing the appropriately ghoulish and creepy underscore to this film is Christopher Gordon.  Gordon had previously blown me away with his work on Moby Dick and On The Beach, so I was expecting some great things from this album.  Unfortunately, my expectations were probably a bit too high as I found the rather high-quality score to be a bit tiresome and plodding.

Vibraphones and creepy strings spell out "Halloween", as we all know, and so it's no surprise that Gordon takes advantage of them in his score.  He also uses a bit of that carnival atmosphere that Danny Elfman was so fond of in The Nightmare Before Christmas, and it detracts somewhat from the feeling of originality in the score.  It all sounds great, and the whimsical playfulness in "Art Class" and "Uncle Fred Returns" is quite nice, but it really doesn't grab me as anything notable.

There is plenty of heart and emotion in the score, as evidenced by such cues as "Father Son" and "The Walking Dead Of Walker Falls".  But running over 10-minutes long, "The Statue & The Dance Of The Ghouls" is a very slow piece that takes almost the entire length to build up to its touching and emotional climax.  It's a great cue, and is closer to the high-caliber of work that I've come to expect from Gordon.  I was not impressed, however, by opening song, "It's Mean, Mean, Mean", which felt tacked on to the album.

Two cues excerpt little bits of classical music - "Spooktacular" uses a bit of Bach's "Toccata and Fugue in D Minor", and "Trick or Treak" uses a bit of Wagner's "Ride of the Valkyries".  They don't add to much to the score (it's more of a joke in the film, I'm sure), but at least Gordon had the cunning to apologize to Bach and Wagner on the CD.  This album runs a solid 53-minutes long, and while it's not terrible music, I really don't see any reason why this album needs to be a part of your collection, unless you really enjoyed the film or are the worlds biggest Christopher Gordon fan.  He's done better work before, and I'm sure he'll do better work in the future - even the most talented of composers don't hit them all out of the park.