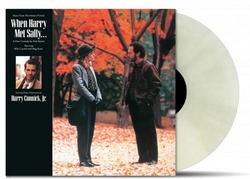 The soundtrack for one of the biggest Hollywood successes of the '80s, When Harry Met Sally... consists of standards performed by singer and pianist Harry Connick, Jr., with a big band and orchestra arranged by Marc Shaiman.

The soundtrack album (which stands apart from the movie) was a big hit and a major step forward for the young pianist-vocalist. Connick warmly sings the numbers while usually accompanied by bassist Benjamin Wolfe, drummer Jeff "Tain" Watts, and a big band. Frank Wess' warm tenor makes a brief appearance on "Our Love Is Here to Stay." In addition, there are a few melodic instrumentals, including some solo Connick piano on "Winter Wonderland" and "Autumn in New York."

The performance of Connick on this wonderful soundtrack won him his first Grammy for Best Jazz Male Vocal Performance. The soundtrack went to #1 on the Billboard Traditional Jazz Chart and was within the top 50 on the Billboard 200. Connick also toured North America in support of this album. It went on to reach double-platinum status.