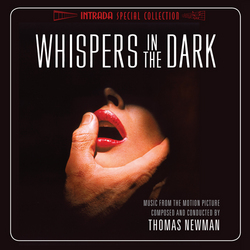 Whispers in the Dark

Although a soundtrack album had been announced in 1992 when the Paramount Pictures film Whispers in the Dark was released in theaters, the album never materialized. Now, some 20 years later, Intrada delivers Thomas Newman's score on CD—a score that is as provocative, alluring and transfixing as film itself. The plot delicately balances the dichotomy of salacious sexual submissiveness with tenderhearted palpitations of romance and is constantly blurring the lines between the two. Newman's handiwork elevates these dual characteristics which permeate the overall tone of the film. The music is ripe with butterysmooth phrases of unadulterated romance stippled with gutwrenching anguish, hedonistic desire and uncontrollable obsession.

Thomas Newman created a startling musical soundscape for Whispers In The Dark, employing signature trademarks of unique, extremely transparent instrumental colors—both acoustic and synthesized. The score as conceived and recorded, however, became something considerably different during final production. Research revealed that the music was rarely used in the finished film as originally recorded or even where intended—including the main title itself, which was tracked with music from later in the score. Intrada presents the complete score as originally conceived by Newman.