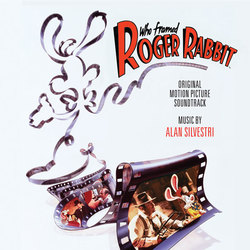 In 1988, Touchstone Pictures and Amblin Entertainment released Who Framed Roger Rabbit, a technological marvel integrating animation and live action. To score the onscreen antics of the wacky Roger Rabbit and his sourpuss human detective-for-hire Eddie Valiant, director Robert Zemeckis called in his trusted composer, Alan Silvestri. The pair first worked together on Romancing the Stone and the following year's mega-hit, Back to the Future. Having also scored the aggressive action film Predator just the year prior, Silvestri was a brand name and brought a diverse set of styles to the colorful, kinetic onscreen action. Starting with a cool jazz styling in the previously unreleased Main TItle, Silvestri sets the tone for the film, then immediately diverts to a cartoon shooting in progress. A colorful and wild orchestra follows the crazy happenings in the cartoon world until production is interrupted. As the story unfolds, private dick Eddie Valiant is introduced as well as his cool and somewhat nostalgic, bluesy theme. The challenge was for Silvestri to write a score that was jazzy noir, action, with generous doses of Carl Stalling. The result is a swirling mix of styles that come together into a unified whole that captures the world of Roger Rabbit, 1940s Hollywood, and the under- and over-belly of the Toon World.

To present this expanded edition, including a wealth of music not used in the final cut of the film, Intrada assembled Dennis Sand's original mixes into a program running 98 minutes. In addition, some alternate takes are provided in the Extras section as well as the three Roger Rabbit shorts released in subsequent years:

To round out this 3-CD set, the final disc contains the original album presentation featuring Silvestri's unique edits and assemblies including some dialog omitted from the complete presentation on the first two discs.