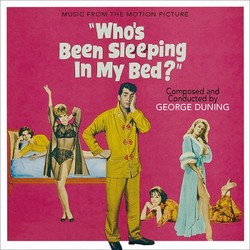 Who’s Been Sleeping in My Bed? / Wives and Lovers

Who's Been Sleeping in My Bed? was a Dean Martin vehicle about an actor playing a surgeon on a popular TV series who is routinely chased by female fans, including the unhappy wives of his best pals. Co-starring Elizabeth Montgomery, Martin Balsam, Jill St. John and Carol Burnett, the film was directed by Daniel Mann and written by Jack Rose. The phenomenal music score was composed by the great George Duning, in his third film with Dean Martin, following Who's Got the Action? and Toys in the Attic. It features an infectious, Gershwin-influenced main theme, romantic cues, cocktail tunes and descriptive music.

Wives and Lovers, directed by John Rich and starring Janet Leigh, Van Johnson, Shelley Winters and Martha Hyers, is about a struggling author (Johnson) and his wife who suddenly become wealthy and move to the suburbs. Their divorced neighbor and her "companion" plant seeds of suspicion in the wife that almost lead to a divorce. The score was composed by Lyn Murray, who provides a terrific jazz-influenced score, with a memorable main theme with some similarities to the "exotica" recordings of Les Baxter. Although Burt Bacharach and Hal David were hired to compose a promotional song that was not included in the film but in the trailer, it has not been included on this CD for contractual reasons.