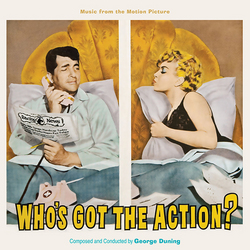 Who's Got the Action?

Track Listing Legend:
* Contains "Who's Got the Action?" composed by George Duning and Jack Brooks.

Who's Got the Action? has a great one by a man who truly understood how to score a frothy and fizzy comedy—George Duning. Duning wrote instantly memorable themes and Who's Got the Action? is full of them. Duning's main theme uses a five-note motif that matches the syllables of "Who's Got the Action?" and it sets the tone for the rest of the score, which is quirky, lushly romantic, effervescent, and just plain memorable. Duning was one of the greats.

This is the world premiere release for Who's Got the Action? The score is presented as it is heard in the film. The tracks are mostly stereo, but five of the film's twenty cues existed in mono only on the music stem. Nonetheless, we felt that presenting them in order was the best way. As a bonus, we include a demo version of the title tune with lyrics by Jack Brooks, and a couple of classical cues used as source music. It's always a treat to bring more George Duning to CD. He was a wonderful composer whose work is always fresh and melodic—what great film music is all about.