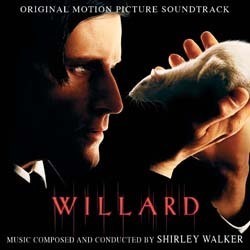 Shirley Walker's cinematic masterpiece, Willard, makes its world premiere debut on cd courtesy of La-La Land Records and New Line Cinema. This bizarre, eclectic, and brilliant horror score is filled with some of the best music Walker ever wrote. Any score that features a half a dozen or so accordions and makes them sound as frightening as Herrmann's strings from Psycho gets a thumbs up in our book.

Sadly, the uber creepy rendition of BEN, as performed by star Crispin Glover, was not available for licensing. Liner notes by John Takis include an exclusive interview with director Glen Morgan.