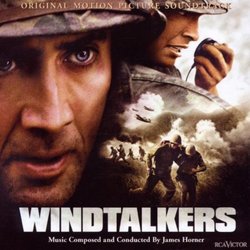 It has taken almost 10 years, but I feel I can say that we finally have a real John Woo film, produced by an American studio.  Sure, Hard Target, Broken Arrow, Face/Off and Mission: Impossible 2 were filled with the amazing action choreography that audiences had expected from Woo - but there was still a crucial element lacking.  Character.  Woo's earlier films, like A Better Tomorrow, The Killer and Hard Boiled, still had the action showpieces, but were ultimately about the characters and their relationships.  A common theme in many of Woo's films is that of brotherhood - a theme he finally revisits in the World War II drama, Windtalkers.  Focusing on disillusioned Sgt. Joe Enders (Nicholas Cage) who is teamed up to protect Navajo code talker Ben Yahzee (Adam Beach), the film deals with the tensions of war and how it affects the relationship between the two men.  Underscoring this high-quality piece of film is a rather banal yet serviceably enjoyable score by veteran film composer James Horner.

As with most Horner scores, the music fits the film like a glove.  Sure, it might be a glove you've worn before - and look like your other gloves - but it still keeps you warm.  Starting off with "Navajo Dawn", which contains the main theme from the film (sounding a bit like A Perfect Storm), Horner keeps the orchestration light and heroic, with plenty of harmonizing, which segues into a rather octave-heavy bit of meandering - which builds up into a rather disappointing statement of a variation on his infamous 4-note "danger" motif.  This doesn't show up as often as you might think, so don't worry.  Still, between the octaves and the light strings, there is something about this score that sounds, well, rather familiar.

Much of the score is filled with your typical Horner passages.  "An Act of Heroism" contains string heavy tension with bits of staccato brass outbursts, and of course a triumphant rendition of the main theme.  Exciting percussion and action music fills "Taking the Beachhead" and "Marine Assault".  Horner certainly knows how to use the orchestra to its full potential, and there are some really riveting moments.  Is it similar to Enemy at the Gates?  Sure, but so what?  It works for the most part.  There are plenty of soft emotional music as well.  "The Night Before" is calm and soothing, and some moments of "Friends in War" and "A Sacrifice Never Forgotten" certainly fall into that category as well.  "'First Blood' Ceremony" feels a bit out of place, and acts more as a source cue than anything else.  "Calling to the Wind" is a reprise of the main title, and brings the score (and the film) to a close.

Interestingly enough, there is some really good music in the film that is sorely missing from the album.  Some action music, and a rather important duet in the film just aren't here.  Conversely, I'm pretty sure that some of the arrangements on the album are not present in the film.  (Due to there being two different scoring sessions for this score, split months apart due to the delay of the film, that shouldn't be too surprising.)  Perhaps - like other Horner albums - we will in time see a "More Music from Windtalkers" album.  Until that time, though, this is a rather serviceable score to a superb film that is enjoyable to listen to, but doesn't really stand out as anything overtly unique or noteworthy.