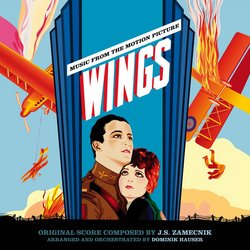 When it was decided to restore the classic Wings for the studio's centennial, Paramount Pictures commissioned a new arrangement of J.S. Zamecnik's original score (originally played live to picture) to be newly recorded for the film. A prolific composer for films during the silent era, this release marks the very first time that a Zamecnik score has ever been recorded and released.

Hauser brings Zamecnik's original score, rich in dramatic, romantic and action material (as well as peppered with classical compositions), to life in all of its robust, thematic splendor. This music, much like the film's phenomenal aerial sequences, simply soars to exciting heights

Jeannie Gayle Pool, who was asked to produce the score restoration for Paramount, brings you behind the scenes of that process in her in-depth liner notes. This 75 minute release is jam packed with the very best music from this landmark film. What better way to commemorate the restoration of piece of film history than to release a piece of film music history!