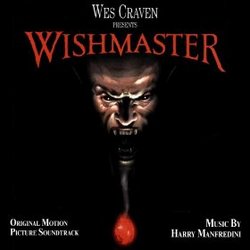 After two years, most people seem to have already forgotten that Wishmaster was ever made, and there's nothing at all wrong with that. After all, many critics seemed eager to forget it upon it's release. So it seems only fitting that the film should be endowed with a forgettable score, and that it is.

Harry Manfredini - whose notable scores include Friday the 13th, House, and Deep Star Six—has found ways of somehow making acoustic instruments sound synthetic and uninteresting, and he's taken it to the max here. I have nothing against synth-driven scores, or scores wherein the synths augment acoustic instruments, so long as something interesting is being said musically. Here, that's not the case. The album starts in a manner almost promising—the atmosphere seems on the road to something genuinely suspenseful or frightening, but never really gets there. Instead, what we're given are stock horror cues, with screaming high trumpets and driving rhythms, all lacking any sort of thematic substance.

What's odd is that I remember enjoying "Alexandra's Theme" and "Areiella," but I can't for the life of me remember any part of either of those cues. What were they, then? Like the rest of the score, just filler cues—albeit, prettier than the aggravating terror and quasi-Arabic music, but still little more than musically treading water. The film itself has been cited for liberally borrowing from the Hellraiser series—maybe the score would have been better off to have done the same.