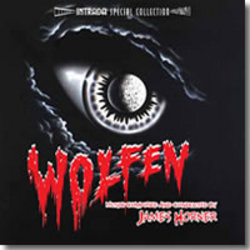 Early James Horner soundtrack for sensational Michael Wadleigh horror thriller finally gets released. Riveting tale stars Albert Finney as detective on trail of serial killer which turns out to be not human.

Though that music was not available for this release, entire score Horner did compose for Wolfen is here, including pair of alternates not used in finished film. Entire production was supervised by the composer. James Horner conducts.