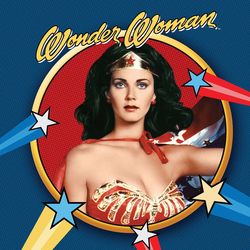 La-La Land Records, Warner Bros., DC and WaterTower Music commemorate 75 years of Wonder Woman, with a very special, limited edition 7" vinyl picture disc single featuring the immortal Wonder Woman theme from the classic 70's TV series! This wondrous release showcases the iconic character as portrayed by Lynda Carter on a picture disc, with the Diana Prince side containing the Season One Main Title and the Wonder Woman side containing the Season Three Main Title. The disc is housed in an attractive sleeve that radiates the gloriously fun spirit of this beloved series. Produced by Neil S. Bulk and art designed by Dan Goldwasser, this must-have presentation of a timeless TV theme is a limited edition of 1000 units.