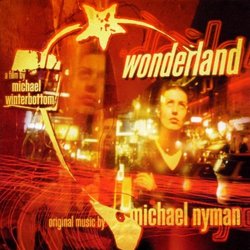 I make no qualms about being a Michael Nyman fan. It might very well be an addiction, even. Even so, I find myself a bit wary of buying his albums. Though I've only once been disappointed with one—the "String Quartet No. 4" album really didn't do much for me at all—I still wonder, will this one live up to all the others? After Wonderland, I've decided to do away with all such wariness in the future.

Nyman's score for Michael Winterbottom's film about the lives of three sisters in London is at once somber and hopeful; it conveys, in a word, wonder. Those who are familiar with his rejected score to Practical Magic will hear the most obvious similarity to his former work, as one of the secondary themes from Wonderland is quite similar to one from that film. Even with all of the Nyman-isms, though—the snap rhythms, the almost Baroque structuring, and the Michael Nyman Band—there's enough here that's new to keep one interested. Some of the solo piano work on this album actually sounds almost jazzy, and the main theme is quite memorable, if not so much hum-able.

A review like this needn't be too long; suffice to say that Michael Nyman has turned in another beautiful score - one that remains subtle but poignant. For all fans, it's essential; for those not quite sure, it's a safe bet.