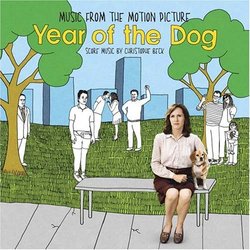 Year of the Dog

Review: Year of the Dog

There is indescribable pleasure in searching for something for years and finding it in the most unexpected place. For seven years now, I have been on an on-and-off quest to get my hands on the music Danny Lux and Mark Leggett composed for the short-lived summer show Young Americans. It used a distinct musical palette that was quintessentially summery, a combination of acoustic guitars, marimba, whistles, and heavy drums. This style seems to recall Thomas Newman, yet it was different and extremely addictive. When I started to listen to Christophe Beck\'s score to Year of the Dog, it was akin to finding my musical Holy Grail. For the first time since hearing Young Americans, there was this style again, this exuberant mixture of breezy marimba rhythms and guitar-driven innocence. Plus, it had a really catchy theme which, like a dog\'s snout, managed to find itself pretty much everywhere.

The story it vividly underscores concerns Peggy (Molly Shannon) and her erratic life after the death of that most beloved creature of all, her dog Pencil. It is Pencil\'s Theme which supports the entire score, boldly stated, harmonically hinted at, and sometimes twisted and varied upon. It is supported by a rhythmic pattern which opens "Year of the Dog" on what sounds like a guitar being picked very close to the frets to create a tinny and arrested sound. The clarinet longingly hints at the melody before the glockenspiel states it in full, accompanied by gentle guitar arpeggia, piano chords, and sawing fiddle figures. The acoustic guitar takes the theme over in "Pencil\'s Theme" in a "Snuffy" Walden fashion, with ornamented grace notes and the marimba replacing the understated rhythmic effect of the first track. The score frequently returns to this brisk and inspiriting summer mood in cues such as "Cupcakes", "Road Trip", and "Peggy\'s Goodbye". In "Fifteen Dogs, One Car", Beck trades it in for a more folksy approach with strumming guitars and Pencil\'s Theme on accordion accompanied by shakers.

The score slows down in between these moments of pure pleasure to bask in the shade of instants of indecision. "Tee-Tee" presents us with the more personal side of the music with gleaming pitched percussion. The melody is often stated quite delicately over childish glockenspiel arpeggia, which reminded me of Stephen Glass\' Theme from Shattered Glass. "Leaving Newt" states what is perhaps the darkest side of the score: a quickly falling accompaniment for the higher pitches of the piano, a quiet rainfall of notes working behind a melancholic cello. This figure returns in "Looking for Valentine" and "Snail Bate", in the latter sounding more and more Newmanesque by the addition of handbells which had colored previous cues like "The Bookstore" and "Crowded House". "Peggy\'s Goodbye" is Beck\'s farewell to his material with a great reprise of Pencil\'s Theme preceded by rhythmic work for the marimba, glockenspiel, and guitar. It is a hopeful take-off delivered in that permeating summer vigor.

The album itself concludes with two pieces from Penguin Cafe Orchestra and one folksy song by The Naysayer. Penguin Cafe Orchestra was the brain child of classically-trained composer Simon Jeffes, a departure from classical and rock music and an embrace of ethnic freeform; their "Music for a Found Harmonium" works well in concert with Beck\'s more brisk pieces. It holds a fast guitar backbone doubled by Jeffes\' reed organ in a manner that reminded me of traditional Quebecer music. Their "Steady State" slows the pace down but offers a slowly burgeoning melodic progression for nasal woodwind coupled with interesting foraging lines for the cello and light percussion. This all fades to lead us to The Naysayer\'s "Lose Yourself in Nature", a little offbeat indie folk piece for tambourine, gleaming glockenspiel, gentle guitar, and Anna Padgett\'s quiet and bare vocals.

Year of the Dog is addictive. Its short running time means it goes out as the getting is still good and there is no choice but to hit the play button again. Its main theme is vibrant and its colors are lively and indelible. If there ever was music written for the freedom of the summer season, this is it. Highly catchy and brisk, Christophe Beck\'s Year of the Dog is a home run and one of my favorite scores of the year so far.