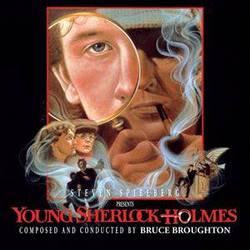 Composer Bruce Broughton was relatively new to Hollywood when he was tapped to score Young Sherlock Holmes, having worked mostly in television for the first decade of his career. Director Barry Levinson's kinetic film, with its fluid pace and wide variety of tones, presented him with a fresh, yet daunting challenge. Broughton rose to the occasion with a stunning, wall-to-wall symphonic work that made a deep impression on soundtrack fans and industry professionals alike, earning a Grammy nomination for Best Instrumental Composition and winning a Saturn Award for Best Music from the Academy of Science Fiction, Fantasy & Horror Films.

The original MCA Records soundtrack album, released on LP and cassette, received high marks in Billboard, who praised it as "a traditional orchestral score, which Broughton infuses with both dash and sweetness." Remarkably, however, the MCA album never made the transition to a commercial CD. This, coupled with the fact that a great deal of outstanding material did not appear on that album, has made the present release one of the most eagerly anticipated of all time.

To present Broughton's entire score, including alternates, Intrada obtained the 2" 24-track 30 ips session masters recorded by Eric Tomlinson at EMI Abbey Road Studios in London during September 1985 and vaulted in pristine condition at Paramount Pictures. New digital stereo mixes were made at Intrada under the composer's supervision. The resulting audio is crisp, clear and detailed. The liner notes also contain a new, spirited interview with Bruce Broughton.