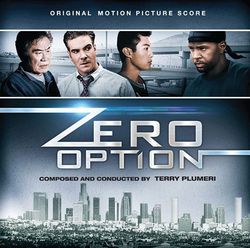 KeepMoving Records offers a double-header CD featuring two of the Terry Plumeri's lesser-known works. Directed by David Batts, Zero Option tells the story of three unrelated individuals whose lives will collide in a most unusual manner. Plumeri treats each storyline with its own distinct musical ideas, ranging from Japanese influences to dissonance and a hit of Americana with solo guitar.

The second film is called The Sleepless, which was directed by Domonic Paris. Plumeri's music for the film has an edgy neo-noir feel where the obligatory genre template (the muted trumpet solo familiar from Nino Rota's The Godfather scores) is placed into an orchestral context with a few electronic additions.

Featuring two excellent scores for the price of one, the CD also comes with an 8-page booklet with commentary by Gergely Hubai and personal impressions by Terry Plumeri describing how his music fits these lesser seen gems.